What's happening, Groove-ophiles? Yep, today we're looking at the daughter of the Earth-2 Batman and Catwoman, Power Girl's pal, and pre-Crisis JSA stalwart, the Huntress. Technically, if Ol' Groove was just gonna lay Helena Wayne's first appearance on ya, you wouldn't get much. Y'see, the Huntress' debut in All-Star Comics #69 (August, 1977) lasted all of three pages, and most of those panels were of her hiding in the shadows, trying to make us all think there was a new Batman in town. Cool, but not "Famous First Fridays" worthy, dig? Check it out... 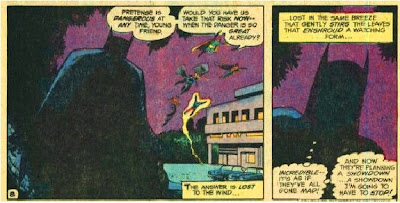 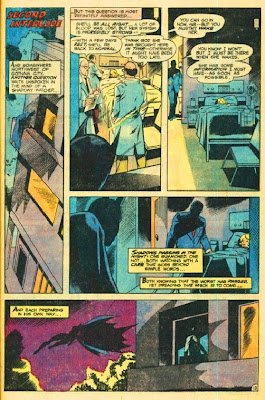 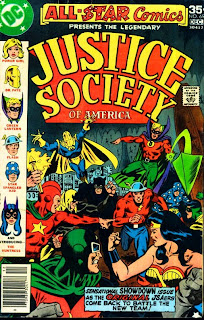 The worst part is, they blew the whole surprise by giving us a head shot of the Huntress on the cover! See her over there on the bottom left?

Made the issue's final panel a little anti-climatic, wouldn't ya say? 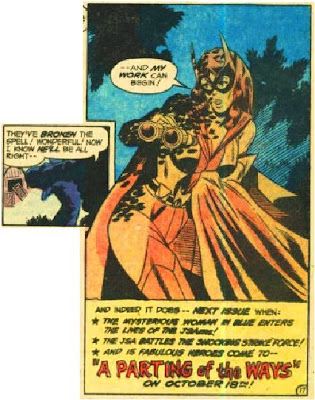 I blame the glitch on the excitement of creators Levitz, Staton, Layton, and Orlando in trying to introduce their glitzy new heroine to the comicbook world. They knew they had a far-out character, and they came up with an equally awesome origin, which appeared in DC Super-Stars #17, which came out the same month as the Huntress' teaser appearance in All-Star. And that origin story, Groove-ophiles, is what we're gonna take a loving look at today! Ready? Let's go!

One'a the cool things about comics having letters/text pages was the amount of behind the scenes you could luck up on sometimes. For example, the text page for DCSS #17 gave us the whole skinny on how the Huntress came to be, complete with character sketches and cover roughs... (y'gotta click 'em, man!) 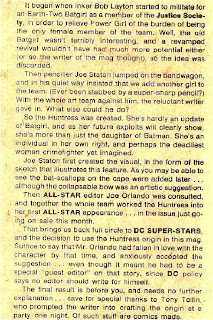 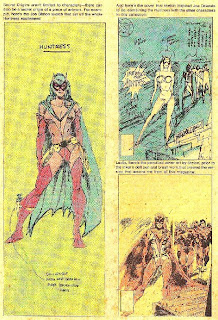 Okay, now that you know how and why Helena Wayne was created, let's look at how she came to be! Writer Paul Levitz, artists Joe Staton and Bob Layton, and editor Joe Orlando--hit us with, "From Each Ending...A Beginning!" 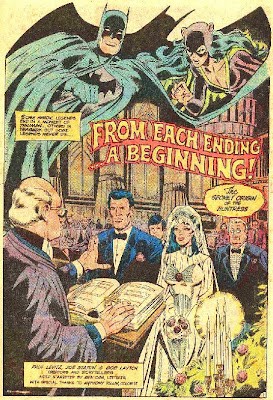 Our story begins with a look at the wedding of Bruce Wayne and Selina Kyle. Seems that on Earth-2, the Catwoman eventually reformed, giving up her life of crime to marry our favorite crime-fighting millionaire. Before long, they became the proud parents of one Helena Wayne. 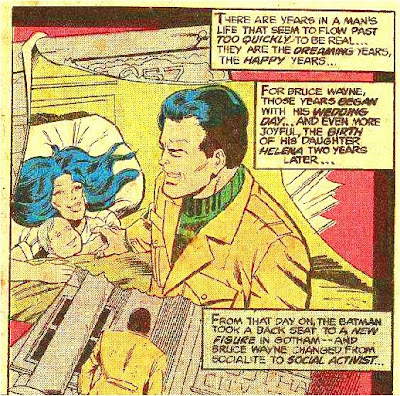 For years, they were a happy family, with Bruce in semi-retirement as Batman, content in allowing his ward, Dick (Robin) Grayson to carry on the crime-fighting mantle. But this is comics, so eventually, things have to go south. After years of idyllic happiness, Selina receives a phone call from a former flunky who insists on a secret meeting with his former boss. 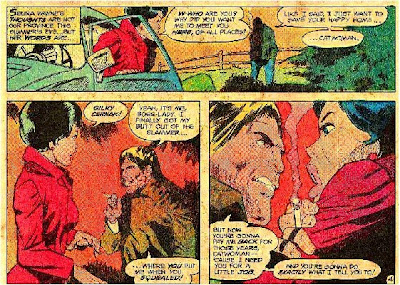 Seems Silky Cernak has a photo of Catwoman actually killing a Gotham policeman. He tells Selina he's perfectly willing to destroy the photo, if she, as the Catwoman, consents to lead him and his gang on one last heist. Seeing no other choice, Selina agrees to the blackmail scheme...and of course, the Batman comes out of retirement just in time to unwittingly intervene on his wife's last criminal act... 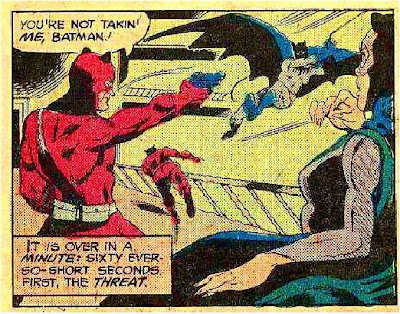 Bad enough Catwoman is about to be caught red-handed by her own heroic husband, but that gunshot also goes astray... 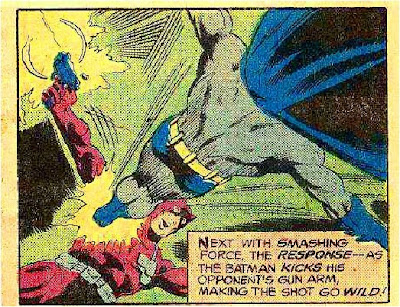 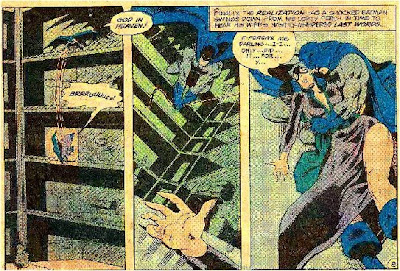 At Selina's graveside, the lives of two heroes are irrevocably changed... 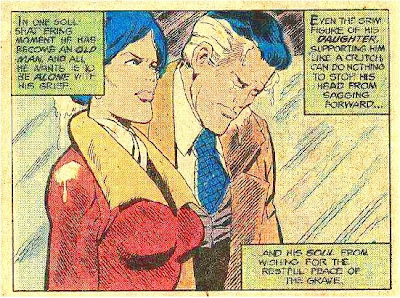 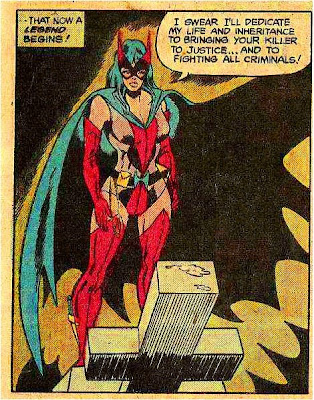 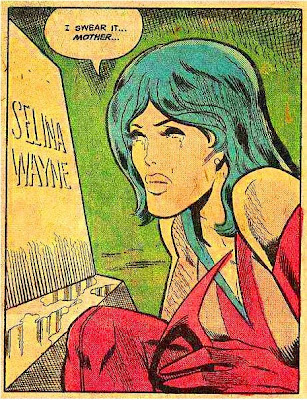 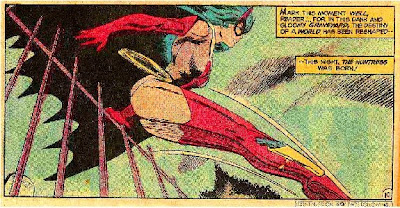 Quickly, the Huntress lives up to her name, as she's hot on Silky Cernak's trail... 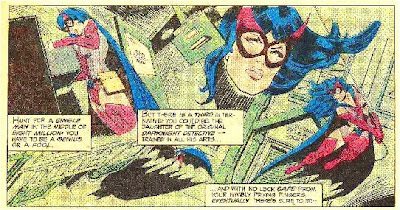 And with the skill and daring she so obviously inherited, tracks down her mother's killer... 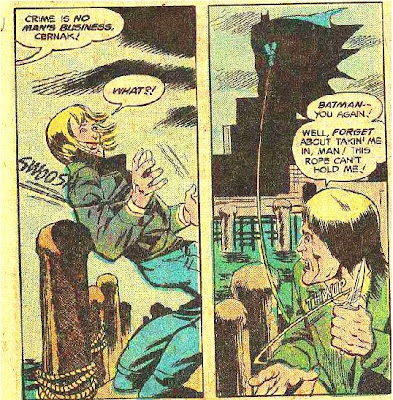 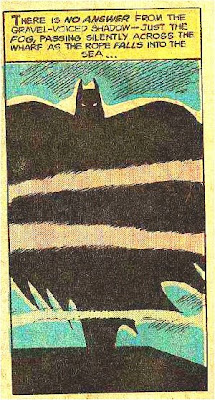 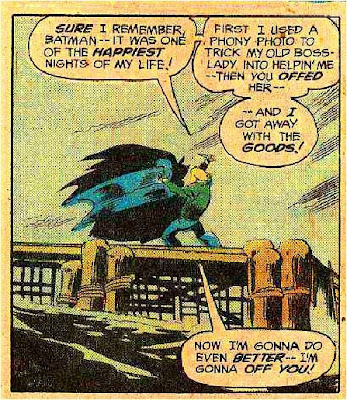 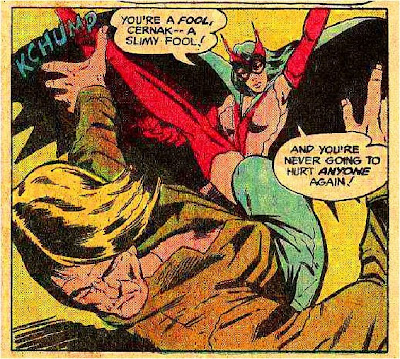 ...and turns him over to the police. 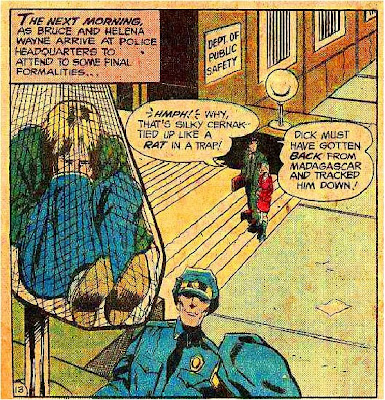 A cool debut for an awesome new character, no? My only gripe is Bruce's "ho-hum" reaction to Silky's capture. I think I'd be a little more--excited to see my wife's killer brought to justice, but that's just me. Anyway, Helena's prophetic skills aren't quite up to her detective skills... 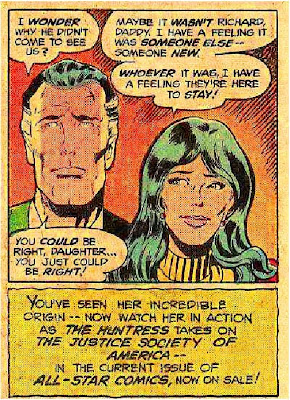 ...But it's through no fault of her own. She tries to make good on being "...here to stay", appearing in the rest of the JSA's All-Star run (though issue #74), immediately gaining a berth in the remainder of the Batman Family's run (issues 17-20), and hanging with the JSA when they moved to Adventure Comics (issues 461-466). She also usually appeared with the JSA when they'd have their annual summer team-ups with the Justice League, and had a short stint as a back-up strip in Wonder Woman during the early 80s.

Unfortunately, DC killed Helena (not to mention wiped out Earth-2) during the legendary Crisis On Infinite Earths, eventually replacing her with a new, less interesting Huntress.