The death of a loved one is a time-honored tradition in comics. It is often the catalyst that sends a character on his superheroic journey. Secret identities for superheroes were created for the express purpose of safeguarding loved ones. So what happens to superheroes whose careers are going about as well as they could be expected (especially for guys who are often wanted by the law they uphold), and even their love lives are falling into place. What happens when a superhero is happy and in love? Well, in the Marvel Universe of the Groovy Age, Ol' Groove tends to believe that there was some sort of law against such happiness. Witness the abject misery of this quartet of Star-Crossed Superheroes: Sub-Mariner, Spider-Man, the Hulk, and Captain America. 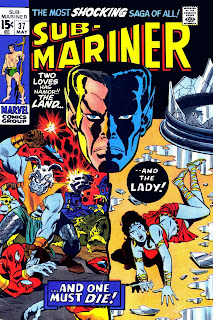 Many of you have probably never heard of Dorma, and those of you who have might be surprised to learn that she was actually one of the original Marvel Universe characters. So, Prince Namor had an on-again/off-again romance with this blue-skinned beauty for over 30 years (off-again because Subby seemed to forget about Dorma whenever Sue (Invisible Girl) Richards of the Fantastic Four was around). In fact, Namor and Dorma were to marry in issue #36, but the evil Lemurian Llyra had captured and replaced Dorma in an effort to trick Namor into marrying her, instead. The Sub-Mariner learned (in the nick of time) of Llyra's trickery and set out to rescue his lady love. Unfortunately, Llyra saw Namor coming and... 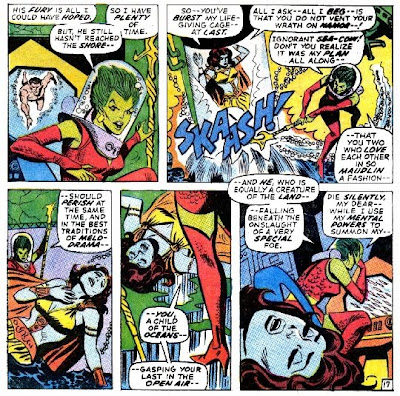 Using the last of her quickly-waning strength, Dorma lashes out the only way she can... Free from the leeches, the Sub-Mariner makes haste to Dorma's side as Llyra slips away to plague Namor another day. Our hero is too late. His lady love has but one breath left... 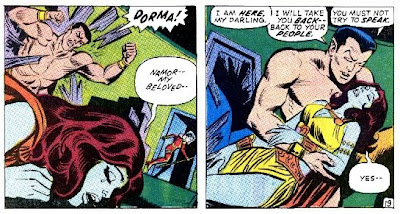 Carrying his beloved's lifeless body out to the surf that spawned them, Namor is left alone with his monumental grief. In the Sub-Mariner's next issue, overcome by despair, Namor gives up the throne to his beloved Atlantis and seeks to find answers as to why his life has taken such an awful turn. 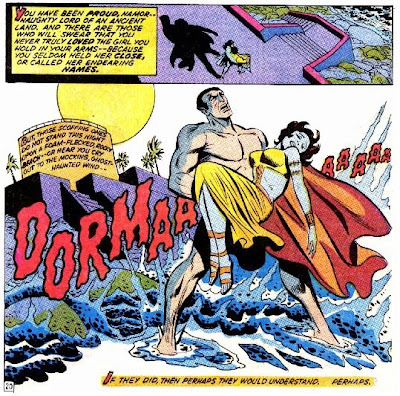 Why was Dorma killed? Perhaps it was because poor Dorma had been written as such a boring, wishy-washy character since her Silver Age resurrection. Perhaps Marvel didn't want to seem like they were ripping off DC who had married Aquaman to his lady, Mera, a few years earlier. Though we don't know the specifics, there is no doubt that Dorma was killed because the writers wanted to take Namor off in a different, less "Antlantis-centric" direction, leaving no interesting role for Dorma to fill. 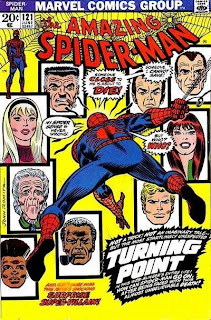 If ever there was a couple destined to become star-crossed it was Peter (Spider-Man) Parker and Gwen Stacy. Gwen was always frightened and mistrustful of Spidey, so Peter was never able to reveal his identity to her. The situation was made even worse when Gwen's policeman father, Captain Stacy, was accidentally killed during a battle between Spidey and Doctor Octopus (ASM #90). Shortly after her father's death, Gwen broke up with Peter, but they soon reunited with a stronger bond than ever. Pete was even making plans to find a way to reveal his identity to Gwen to clear the way for marriage. Fickle fate, in the form of the Green Goblin stepped in to ruin all of those plans. Y'see, the Goblin knew Spidey and Peter are one and the same, so he did the thing that all superheroes most dread: kidnapped Spider-Man's girlfriend to lure him into battle. Taking Gwen to the top of the Brooklyn Bridge (erroneously labelled by editor Stan Lee as the George Washington Bridge in the text), the Goblin waited ever-so-patiently for our web-slinging hero to swing into action, and of course Spidey didn't let him down. During a lull in the battle, Spidey rushes to Gwen's side, intent on getting her out of harm's way, but nope... 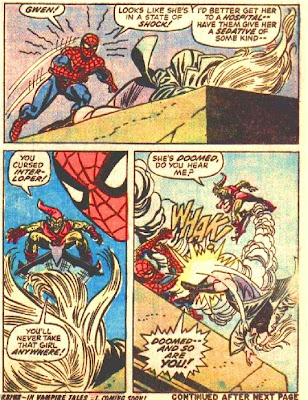 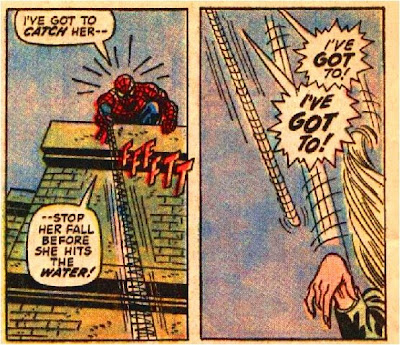 In one of comics' most (in)famous scenes, Spidey shoots a web to grab the legs of the girl he loves before she plummets to her death...

This panel has been a source of controversy for decades, but I think that creators Conway and Kane made the cause of Gwen's death perfectly clear... 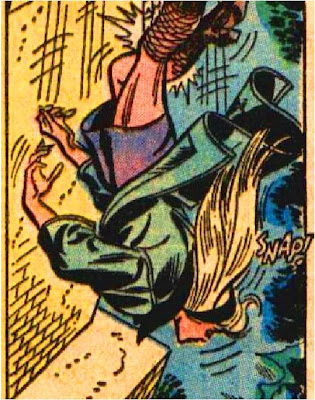 Look at the same scene just a little more closely. See the motion lines around Gwen's head? And if that's too subtle for you, check out the sound effect in the vicinity of Gwen's neck. The reason for the controversy? For one thing, in many reprintings of this story the "snap" sound effect was left out. For another--well, we'll get to that shortly. First, let's leave Spider-Man alone to come to grips with his lady-love's demise... 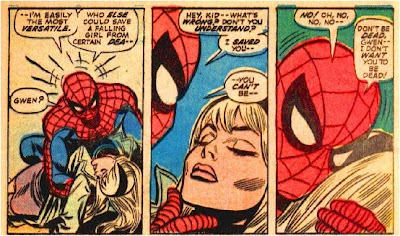 Now, here's where the confusion about the cause of Gwen's death comes in. Although the art and sound effects leave no doubt that Gwen's neck was broken due to being grabbed by Spider-Man's super-strong webbing, the Green Goblin, himself, gives Spidey a reason for Gwen's demise that completely exonerates our hero. 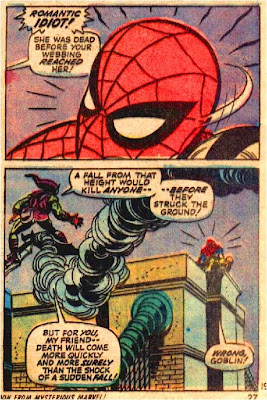 Why? Neither Spider-Man nor the Goblin could have heard the snap, for one thing. Did Conway, as some have debated, simply want to "torture" his reader's with the possibility of our hero being responsible for Gwen's death? Doubtful, but if that was the case, editor Roy Thomas ruined his "fun" in the letters page of Amazing Spider-Man #125 (July, 1973) when he answers a fan's letter about Gwen's death thusly:

"...it saddens us to have to say that the whiplash effect she underwent when Spidey's webbing stopped her so suddenly was, in fact, what killed her. In short, it was impossible for Peter to save her. He couldn't have swung down in time; the action he did take resulted in her death; if he had done nothing, she still would certainly have perished. There was no way out."

The real reason for Gwen's death? Writer Conway (as well as other prominent Marvel Bullpenners including the legendary John Romita, Sr.) thought that the only other place for the Peter/Gwen relationship to go was marriage, which he thought just wouldn't be cool at all. Yep, Gwen's death was a cop-out, Groove-ophiles. One of the few true missteps of the Groovy Age, to be sure.

Gwen's death also opened the door to a decidedly darker Age of Marvel comics. Before this, no matter how bad things got, Spidey could wise-crack his way out of it. Now our friendly neigborhood superhero was ready to murder his arch-enemy. That "darker age" was still many years off, but it was coming, as the deaths of Gwen, the Goblin (in ASM #123), the coming of characters like the Punisher and Wolverine, and the emergence of creators like Jim Starlin, Steve Englehart, and Frank Miller (to name but a few who would take the Marvel Universe in particular and comicbooks in general to a new level of sophistication) would prove. 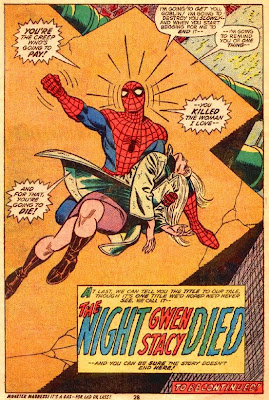 Come back tomorrow for the cataclysmic conclusion to this epic essay, as we look at the Hulk's heartbreak and Captain America's anguish. Miss it not, Groove-ophiles!
Posted by The Groovy Agent at 12:02 AM