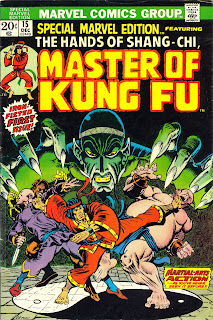 One of the greatest series to come out of the Groovy Age, without a single doubt, is Master of Kung Fu. Created by Steve Englehart and Jim Starlin, Shang-Chi was brought to comicbook life for two reasons: 1) Marvel got the rights to publish Sax Rohmer's great pulp villain, Dr. Fu Manchu, in comicbook form and 2) to cash in on the Bruce Lee-fueled kung fu craze of the early 70s. While the reasons for the creation of Master of Kung Fu (or MOKF, as we affectionately referred to it) were mercenary, the execution was comicbook art at its finest. From his wondrous website, here's co-creator Steve Englehart's memory of the creation of MOKF:

"Jim Starlin and I loved the television show Kung Fu and wanted to play with its Eastern philosophy. Nobody else at Marvel believed in it, but we got a slot in a previously-reprint title called SPECIAL MARVEL EDITION, and we co-created SHANG-CHI. I meditated for a long time on the I Ching to create his name, which means "The Rising and Advancing of a Spirit," and I envisioned the title as a companion book to DR STRANGE." 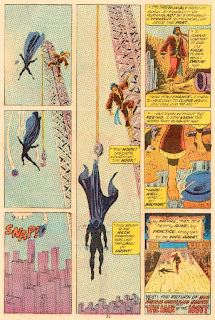 In an interview on Universo HQ (3/3/2001), Jim Starlin had this to say about his hand in co-creating MOKF:

"Working with Steve Englehart was fun and I loved the TV show Kung Fu. We wanted to do a comic adaptation of the show but Time Warner owned the show so. The bad thing about that project was having Fu Manchu added to the mix.

"I had never read any of (Rohmer's Fu Manchu books) and had no idea how racist the books were. Many of my Asian friends gave me an earful after the book came out."

Shang-Chi, Master of Kung Fu made his debut in Special Marvel Edition #15 (September, 1973) and was a smash. Such a smash that two issues later Special Marvel Edition was officially re-christened Master of Kung Fu (MOKF #17, January, 1974) and spun off a companion black and white magazine called Deadly Hands of Kung Fu which ran for 33 issues (January, 1974-November, 1976). Both Englehart and Starlin were the types of comicbook creators who put their all into every page, and they were also quite busy and in-demand, so neither was able to stay on the strip for very long. Starlin was only able to pencil the first three stories, Englehart only wrote the first five. 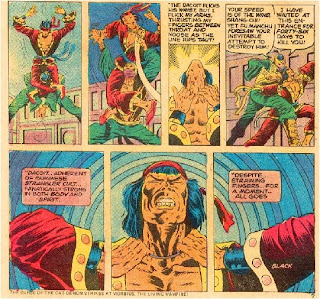 It was written in the stars for MOKF to remain a high-quality mag, though, because Englehart and Starlin's successors were up-and-coming super-stars in the making: Doug Moench and Paul Gulacy.

Author Doug Moench, who took over with MOKF #21 (#20 was written by Gerry Conway), didn't follow Englehart's plan of MOKF becoming "a companion title to Dr. Strange", but made the book an action/adventure strip more in tune with Rhomer's Fu Manchu books, but with a 70s sensibility and a whole lot of James Bond-ian flair. Shang-Chi, however, remained true to Englehart's vision, ever the spiritual, philosophical, reluctant warrior wearily yet steadfastly battling his father's evil schemes. Moench was wise enough to surround Chi with an intriguing stable of supporting characters, which combined with Shang Chi's unique personality and Moench's action filled plots of espionage, made MOKF the benchmark for mature/adult comics (in the best, most positive sense). Moench would remain the book's main writer until disagreements with editor-in-chief Jim Shooter forced him off the book with issue #122 (December, 1982). Without Moench, the book died as swiftly as it was born, ending with issue #125 (March, 1983). 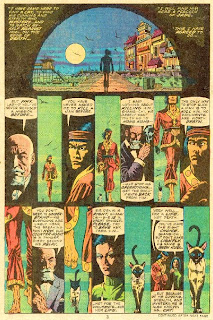 Paul Gulacy took over the artistic chores with issue #18 (February, 1974) and hit the ground running. That issue was only Gulacy's second professional art job (his first being a Morbius story in Fear #20, November, 1972), and those who remembered his Morbius story were stunned at his artistic growth. Gulacy's style, an almost outright imitation of the fabulous Jim Steranko, got exponentially better with each issue until he reached the point that even Steranko himself once admitted that looking at Gulacy's work was like looking at his own work "without having to do it" (Doug Moench, Comic Book Artist Collection Vol. 3, pg. 34). Though Gulacy drew a comparatively small run of issues (issues 18-20, 22, 25, 29-31, 33-35, 38-40, 42-50, and 53, along with many covers) his style was so strong and ground-breaking that it's still considered definitive. Other artists, most notably Mike Zeck and the late, great Gene Day also produced stellar art for MOKF over the life of the mag. 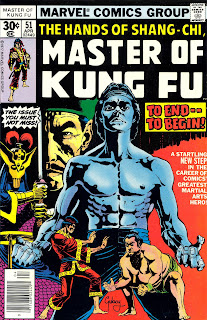 MOKF is a legendary comic, made all the more legendary because it's kind of difficult to find. It's hard to believe that in this day and age of instant trade paperback reprints, MOKF is missing from the bulging bookshelves of comics shops and bookstores. The reason for that is simple: Marvel no longer owns the rights to publish stories featuring Fu Manchu. So unless Marvel and Sax Rohmer's estate ever work things out we'll never see this most beloved and classic series collected, and that's a downright shame. But this is Ol' Groove rappin' at ya, baby! I can't upload the whole series, but I can give you a taste of the glory that was MOKF! Without further ado, here's Steve Englehart, Jim Starlin, Al Milgrom and the gang's debut MOKF effort from Special Marvel Edition #15! Hee-YA!!