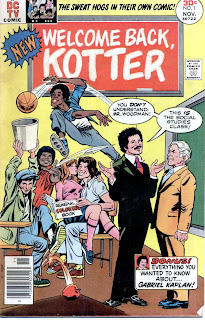 Before Gabe Kaplan co-hosted GSN's High Stakes Poker, he was TV teacher Gabe Kotter. Before he became a mega-ultra-movie super-star, John Travolta made the girls swoon as Vinnie Barbarino. Before he started showing up as "who the heck is that?" at comicbook conventions, Ron Palillo was famed uber-nerd Arnold Horshack. These folks were at the top of a really great cast on the always groovy Welcome Back, Kotter TV show that ran on ABC from 1975-1979.
The sit-com about a bunch of really cool losers and the teacher who proves that they can grow up to become semi-losers was a smash, infusing the pop culture of the day with funny sayings ("Get off my case, toilet face!", "Hi There.", "Ooh! Oooh, ooh, ooh!", "G'head, g'head!"), weird seal-inspired laughs (known as "The Horshack"), games, toys, lunch boxes, and even records (remember John Travolta's "Let Her In"? Bet'cha wish ya didn't! But we did get John Sebastian's great theme song on 45!). Best of all, DC Comics was smart enough to snatch WB,K up and make it into a comicbook.

Think about it. Kotter was a natural for comics. High school screw-ups and their long suffering teachers had been comic fodder ever since a certain red-haired kid bobbied his first sock. DC put some really good talent on the mag, proving folks that wrote and drew Superman and his pals could get down like a clown! Elliot S! Maggin, Jack Sparling, Tony Isabella, Bob Oksner, Ric Estrada, Bob Toomey, Mark Evanier, and Scott Edelman contributed 10 fun-filled issues (August, 1976-December, 1978) that looked and read a lot like the show. Since comics don't have budgets for sets and cast members, we got to see the Sweathogs (as Kotter's students were called) in action in places other than the classroom and Gabe's apartment. Far-out fun stuff, Groove-ophiles! Let me lay "So Long, Kotter!" by Elliot S! Maggin, Jack Sparling, and Bob Oksner from ish #1 on ya! And if you don't like it--"Up your nose widda rubber hose!"