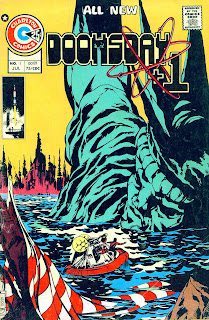 Charlton Comics might've been considered the "last resort" for many comics pros and fans, but they also helped launch some pretty stellar careers. Steve Ditko. Dick Giordano. Steve Skeates. Denny O'Neil. Jim Aparo. Pat Boyette. Joe Staton. Don Newton. Mike Zeck. And of course, John Byrne. Byrne had proven himself a passionate, talented, and dependable artist on his Rog2000 back-ups in E-Man and on the second issue of Wheelie and the Chopper Bunch. His hard work and dedication was rewarded by Charlton's head writer Joe Gill (a supremely-talented writer who deserves a lot of time here on the Diversions--and will be getting it, just you wait!) tapping Byrne for the art chores on Doomsday +1.

Sci-fi was enjoying with a bit of success in the mid-70s, with post-apocalyptic sci-fi being the favorite flavor (Planet of the Apes' influence was only eclipsed by Star Wars back in the Groovy Age), so it was only a matter of time before Charlton unleashed their own end-of-the-world mag. Gill originally intended for Joe Staton to draw the first issue, then hand the artistic reins over to the newcomer from Canada. Realizing the idea was really kinda jive, he changed his mind and let Byrne draw the debut ish, even going so far as to throw in a few Canadian references. 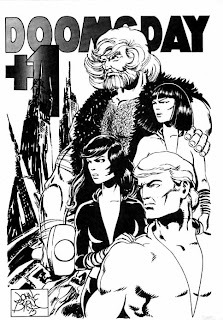 Byrne really earned his $50 a page (for pencils, inks, and letters) on DD+1, even going so far as to rewrite (with Gill's permission) every issue from #2 on. Charlton had a minor hit, as well as a new super-star artist, on their hands. They managed to squeeze out six sensational issues (April 1975-February, 1976) before Marvel and Iron Fist came calling, allowing Byrne's legendary career taking off to heights few have (or perhaps ever will) reach. In fact, when Byrne's career took off into the stratosphere while he was drawing the X-Men for Marvel, Charlton reprinted all six issues of DD+1 (March, 1978-February, 1979).

I'm sure Byrne, himself, would cringe looking back at his early work on the strip (don't we all kinda flake out when we look back on some of our old days?), but you can sure see a solid, if still raw, talent at work. Some pages (like the outer space shot on page 7, the charge/death of the woolly mammoth on pages 13-14, and the Boyd/Kuno battle on page 16) are so outta sight they still take Ol' Groove's breath away. Here it is! Doomsday +1 #1 by Gill and Byrne! Get ready to rock(-et) Groove-ophiles!