Welcome back, Groove-ophiles! Yesterday we looked at the luckless loves of Spidey and Subby, today, let's see what kind of heartbreak Ol' Greenskin and Winghead suffered through, shall we? 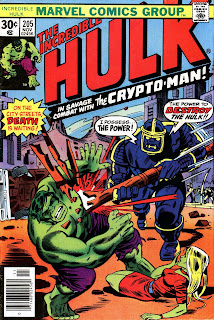 Who would have thought it even possible for the Hulk, not Bruce Banner, but the Hulk to have a love interest? Legendary author Harlan Ellison and the awesome Roy Thomas, that's who! In Incredible Hulk #140, old Jade Jaws met and fell in love with Jarella, princess of the sub-atomic world K'ai. Of course, the catch was that the Hulk had to be shrunken down to sub-atomic size to meet her, and was soon returned to normal, leaving him with naught but a tear and a fleeting memory. During the early 70s, Marvel writers found ways for Jarella and the Hulk to hook up from time to time, but with the Incredible Hulk issues 202-203 (May-June, 1976), writer Len Wein and artist Sal Buscema took our favorite green-skinned behemoth on a journey that allowed him to not only visit Jarella's world, but bring her back to his own world upon his return. Jarella loved both the Hulk and Banner personas equally. Things were looking great until the star-crossed couple happened upon a rampaging robot called the Crypto-Man. As the Hulk battled the Crypto-Man, fickle fate reared its ugly head once again... 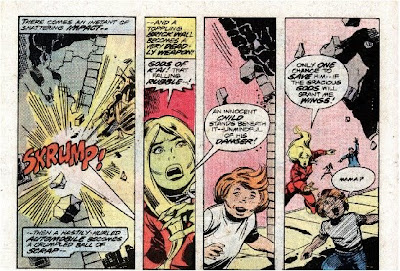 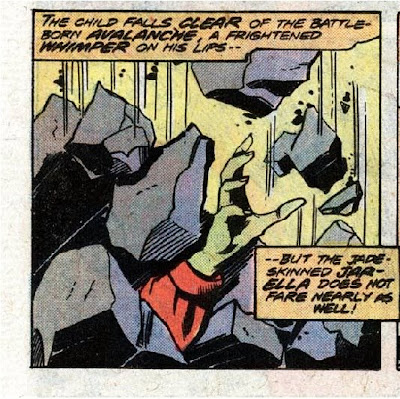 Upon seeing Jarella's battered hand protruding from the rubble, the Hulk went wild, quickly demolishing the Crypto-Man so he could rescue his beloved. The Hulk easily clears the debris, but it is, of course, too late.

While Jarella's death doesn't set the stage for a new direction (as with Dorma's death in Sub-Mariner) or signal a new comicbook era (a la the death of Gwen Stacy in Amazing Spider-Man), it does make for a truly heartfelt storyline. During this particular period of Hulk-history, our Gamma-irradiated Goliath is actually a very simple, innocent, childlike creature given, of course, to throwing tantrums of disastrous proportions, but also capable of very touching moments of humanity. Author Len Wein's superb writing skills are especially well suited for bringing out the best of the Hulk, even in the worst situations. Sal Buscema, whose art is often overlooked in favor of flashier, more trendy styles, shows tremendous skill and craft as he portrays the pain and rage the Hulk faces during this storyline. I dare you to witness the Hulk's heart-rending pain at the thought of Jarella's death and not get a lump in your throat... 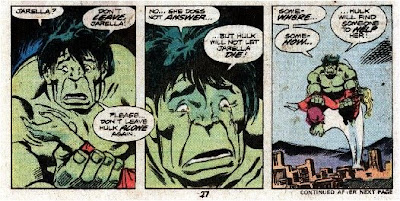 The Hulk is nothing if not stubborn. He refuses to believe Jarella is dead. And even if she is dead, he has the childlike hope that there is someone who can "make it better". His first instinct is to head for Gamma Base, where he believes Doc Samson and the Gamma Base scientists can help revive Jarella... 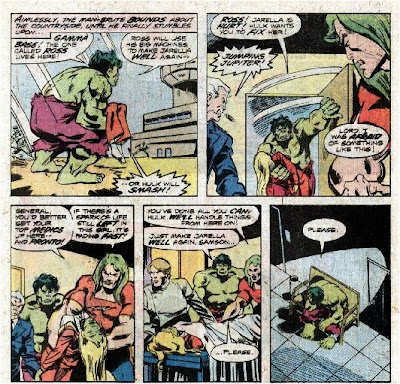 ...Only to have those hopes quickly dashed. He can only respond in his own savage, childlike manner. 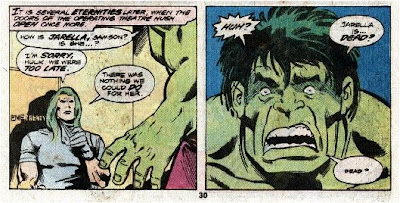 Bruce Banner's former love, Betty Ross Talbot is able to calm him down momentarily, as she also makes a statement that gives the Jade Goliath another glimmer of hope... 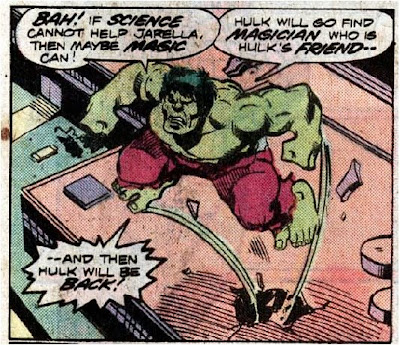 The Hulk spends the next issue-and-a-half tearing New York apart in search of his Defenders ally, Dr. Strange, whom he hopes can use sorcery to revive Jarella... 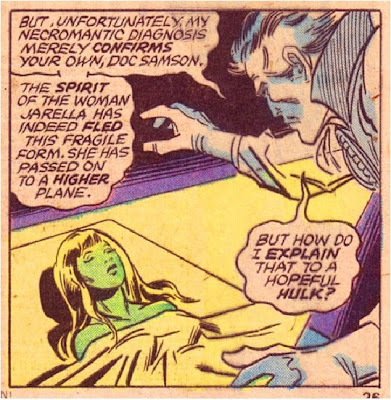 Those hopes, too, come to no avail... 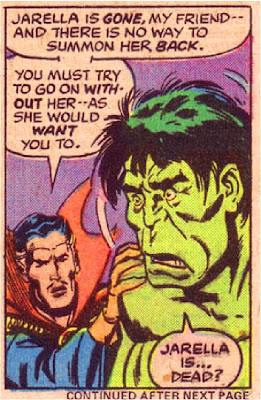 ...sending the Hulk into another tantrum. The Hulk spends a few panels smashing up Dr. Strange's mansion, taking his pent up fury and frustration out on his friend's belongings, when suddenly, the reality of the situation sets in... 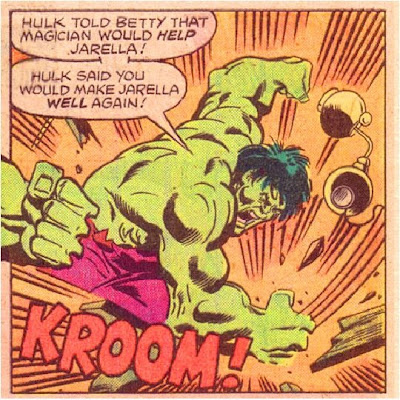 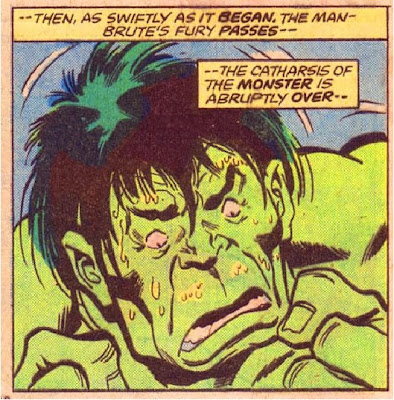 ...leaving our brutish hero with nothing left to do...but weep. 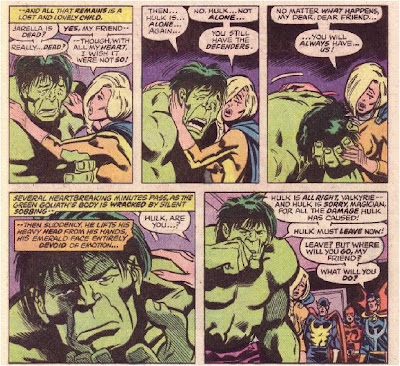 Once more, the genius of Wein and Buscema, as they literally close the door on a most tumultuous chapter of the Hulk's life... 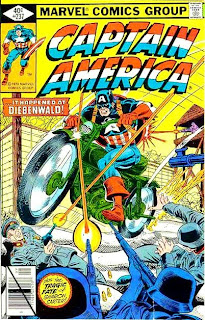 When Captain America first met Sharon Carter, she was known only as the mysterious S.H.I.E.L.D. Agent 13, a spy who bore a strong resemblence to a woman Cap could vaguely remember falling in love with during World War II. Their romance was a rocky one from the start. First, Sharon was an enigma, a mystery for Cap to solve. When they did fall in love, their duties to their country and S.H.I.E.L.D. , not to mention his dedication to the Avengers, kept throwing stumbling blocks into their paths. Eventually, Sharon was asked by S.H.I.E.L.D. to go undercover and infiltrate a white supremecist organization known as the National Force. During Cap's battle with the National Force, Sharon, supposedly under the brainwashing influence of the National Force's leaders, committed suicide. Cap was given the unsavory task of watching Sharon's suicide, which was caught on tape by a news crew, to verify her identity. 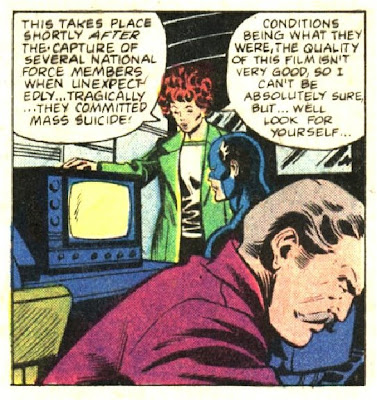 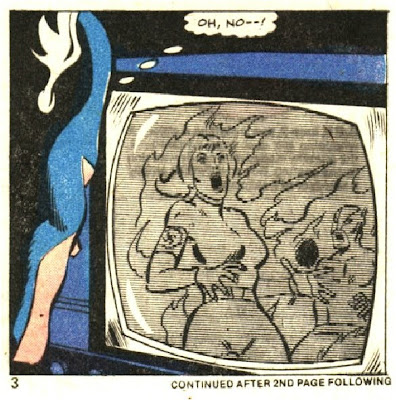 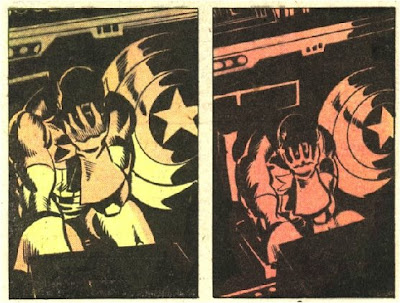 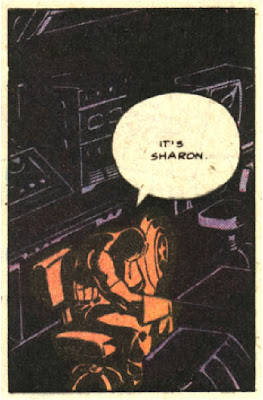 Again, the death of a superhero's true love is brought on by the writers and editors hitting a creative wall. Cap, for a time, is luckier than his Marvel-ous peers, as in the 90s, we learned that Sharon wasn't dead, but in deep cover. The videotape was created for Cap, to keep him from looking for Sharon and blowing her cover. Oh, I said Cap was lucky "for a time", didn't I? That's because, as you know, Sharon is alive now, but our Star Spangled Avenger has gone to that great back-issue bin in the sky. For now, anyway. After all, who really stays dead in comics. Except Dorma. And Gwen Stacy. And Jarella...
Posted by The Groovy Agent at 12:02 AM