Dave Cockrum (1943-2006) was one of the best pencillers and grooviest costume designers to ever hit comics. While he's best known as co-creator of the All-New X-Men (Thunderbird, Nightcrawler, Storm, and Colossus), he's nearly as well known for helping revive the Legion of Super-Heroes in the early '70s. Besides bringing a futuristic, energetic, and very slick style to the Legion (what would one expect from his having worked as Murphy Anderson's assistant?), the thing that Cockrum really grabbed us with were the re-designs of various Legionnaires' costumes. His Lightning Lad, Timber Wolf, and Element Lad costumes were true classics, and he gave us some wild designs for characters like Colossal Boy, Shrinking Violet, and Princess Projectra (check out the upcoming "Ch-ch-changes Part 2" post for more on those far-out threads, Groove-ophiles!). He also helped design and co-create Wildfire, who would become one of the most popular Legionnaires of the '70s and '80s.
Under Cockrum's artistry, the Legion moved from occasional back-up spot (where it had been for several months prior to his taking over) to pushing Superboy to the back of his own book (#197, June, 1973) to taking over the entire mag, essentially making Superboy a guest-star in his own comicbook (issue #198, July, 1973).

Cockrum's influence on the Legion is really put into perspective when you realize that he only worked on a dozen issues (184, 188, 190, 191, 193, 195, 197-202), half of them being back-up stories! Superboy editor Murray Boltinoff didn't realize what he had, evidently, because he let Cockrum go rather than letting the artist keep the magnificent double-page splash from the wedding of Duo Damsel and Bouncing Boy from issue #200. DC's loss was Marvel's gain, as Cockrum moved over there and helped create the Mutant Juggernaut that exists to this day. 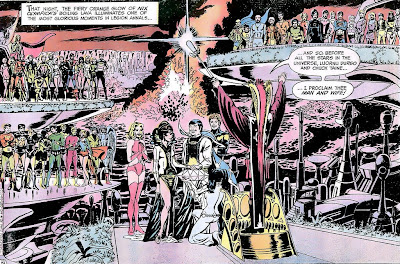 One last bit of trivia. You'll notice on the splash page of Cockrum's debut story, "One Legionnaire Must Go" (Superboy #184, January, 1972) the art credits read, "Art: Murphy Anderson and Dave Cockrum". Dave should'a known right then he was working for a jive-editor. Cockrum truly did pencil the story while his former boss Murphy Anderson inked it, so traditionally, the credits are backwards since the penciller comes first. However, editor Boltinoff didn't want to offend the more experienced Anderson, hence newcomer Cockrum's name came last. 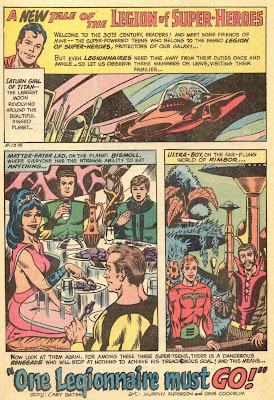 You can see the Cockrum style coming to the fore with the backgrounds. The cityscapes, the exotic plants, the costuming on the non-Legionnaires are all very Dave Cockrum. Didja notice the credits I was gripin' about? Here's a closer look:

Now, on page two, the vacationing Legionnaires are back to work at their newly designed headquarters. There, they settle back into their routines before the real fun begins!

Saturn Girl doesn't just get headaches like other chicks, dig? So it's impossible for a guy to keep secrets as long as a busy-bodied telepath is around, as Matter Eater Lad is about to find out. 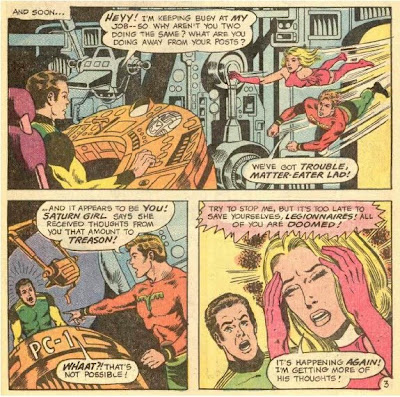 So Ultra Boy hooks Saturn Girl up to the encephalo-detector and lets Matter Eater Lad question her Perry Mason style. (Why don't they just hook M.E. Lad up to it and ask him straight out? Ah, well...) 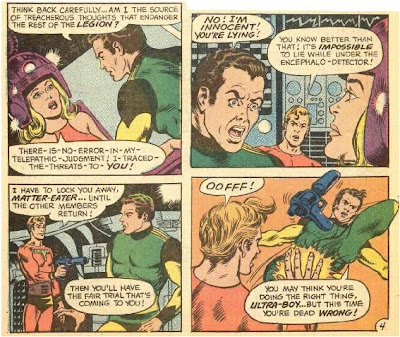 Of course, Saturn Girl is right! She's got no reason to lie, so it's the hoosegow for our boy from Bismol, thanks to Ultra Boy's witty use of his one-at-a-time powers! 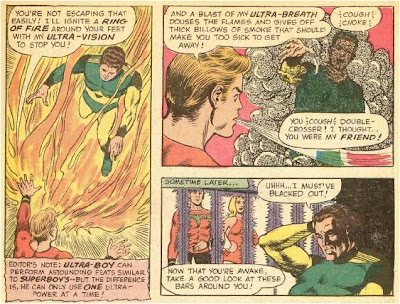 But the bars haven't been made that can hold Matter Eater Lad! Neither iron nor candy! Once he's out, we get to gape at Cockrum's awesome re-design of the Legion Cruiser. Can ya tell Dave was a Star Trek fan? 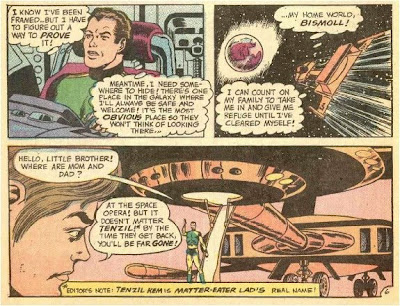 When you're on the run, you always go back home, right? Nobody'd ever think of looking for you there. Well, the Legionnaires don't, at least... I guess no Legionnaire is a fan of the obvious, since M.E. Lad goes home to get help from his little brother--only to learn that little brother is the one who set him up! (Jealous brother goes bad--how original, Cary...) We learn that little brother put a telepathic transmitter into M.E. Lad's din-din (dude, if eating is your power, you should chew more carefully!) and it was he that was transmitting those evil thoughts. Bad plot and hokey dialogue aside, at least it gives us a look at a really cool (or gross, depending on your outlook) use of M.E. Lad's powers!

Matter Eater Lad only gets to look cool for one measly panel, then we find he has the mother of all glass jaws! 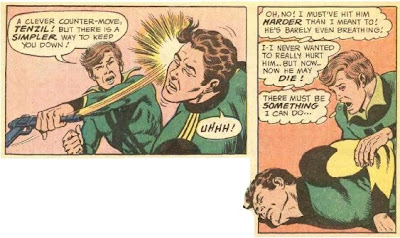 Luckily, little brother has a change of heart and uses his telepathic transmitter to call the Legion (who are apparently headed in the opposite direction of Bismol. Sigh...) and get help for his unconscious older brother.

Soon, Matter Eater Lad wakes up and must make a fateful decision regarding his little brother's actions.

Thankfully, Cary gave Dave better plots to work with after this one. You can find 'em in the Legion of Super-Heroes Archives (Vol. 10) from DC!

Posted by The Groovy Agent at 6:37 AM