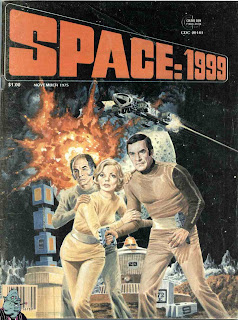 Somewhere/time (cryptically cosmic, huh?) between Star Trek/Planet of the Apes and Logan's Run/Star Wars (1975 to be exact), there was Space: 1999, the syndicated British series that kept sci-fi space opera on the tube during what Ol' Groove likes to refer to as "The Lull". There are tons of sites, like this one, dedicated to the show, so if you wanna learn more about it, remember that Google can be your friend. I think the series' intro does as good a job of fillin' ya in on the series and its stars as anything, myself. Check it out!

Anyway, the main thing I want ya to know about is that Charlton Comics produced 8 issues (November, 1975-October, 1976) of a spiffy b&w Space: 1999 mag during the show's heyday . Space: 1999 sported some magnificent art by folks like groovy Gray Morrow. Don't believe me? Then check out this sensational strip, scripted by the ever-talented Nick Cuti, from ish #1 called..."Endgame!"