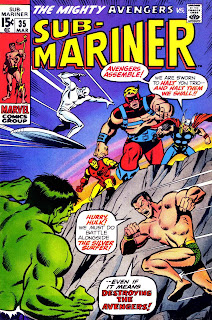 Before they were Defenders, the Sub-Mariner, the Hulk, and the Silver Surfer teamed for two issues of Subby's mag (issues 34-35, November-December, 1970) as the Titans Three. Seems the U.N. was backing a weather-control station that Subby believed would cause destruction for his beloved Atlantis--not to mention the entire world. Well, since they were still hanging out after last issue's team-up, the Hulk and the Surfer decided to help their uneasy ally out by heading for the Caribbean (where the weather-control station was located) to try to do something about the sitch. Somehow, the sight of three uber-powerful, massively mis-understood super-dudes with scowls on their faces made the U.N. reps a wee bit nervous. Whaddya do when you feel threatened by Subby, Greenskin, and the Surfer? You call in the Avengers, natch! And not any old Avengers, but the most powerful trio you can get your hands on: Thor, Iron Man, and Goliath! (Yep, Clint Barton, Hawkeye, Ronin, however you know him, once used Hank Pym's growth serum and was truly one of Marvel's mightiest.)
Okay, fans, the opponents are entering the arena, courtesy writer Roy Thomas and artists Sal Buscema and Jim Mooney! Gotta have a little smack talk before the fight begins... 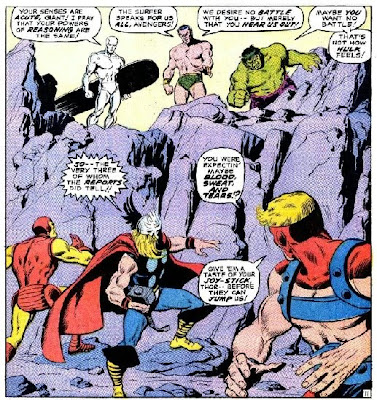 But wait! The Hulk can't take all that talking! He's ready for action! Whoa, baby, the battle is on!! Old Jade Jaws catches the Son of Odin flat-footed-- 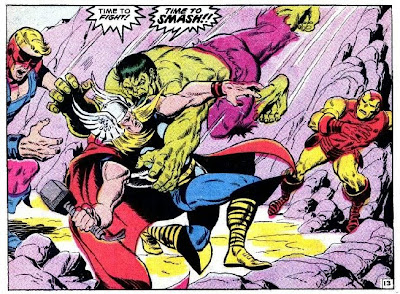 --but even a gamma-ray irradiated Green Goliath has to be careful about going toe-to-toe with the Norse god of war!

But what's this? Thor is trying to talk rather than fight? What's up with that? 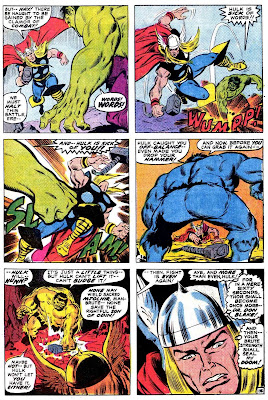 Bad move, Goldilocks! Without that hammer you have sixty seconds before you turn into a--Wait! Iron Man and the Silver Surfer have taken their scuffle to the sky! 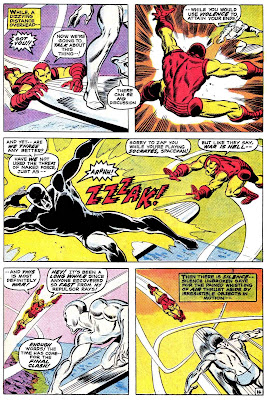 Whoa, where are my Foster Grants? Uh, oh! Namor and Goliath are scuffling on the surf... 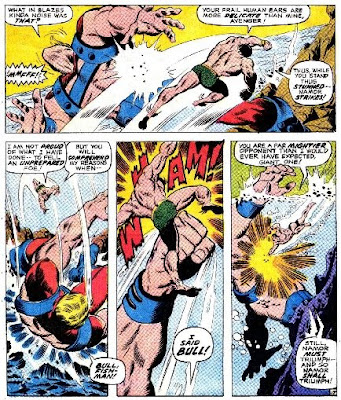 Bad move, Barton! Never take on a superhero in his own comic. 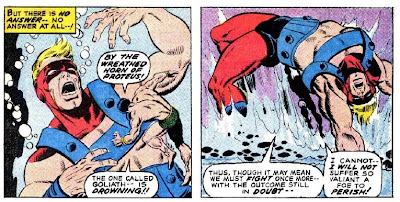 Must be kinda hard to swim when you're giant-size! Good thing Subby wasn't in his "savage" phase at the time'a this tussle!
Meanwhile, Namor's scientists have started their tests of the weather-controlling device. His soldiers have sounded the horn to end the battle--but Thor uses the distraction to sucker punch Jade Jaws! Man, those Asgardians have a warped sense of fair play! 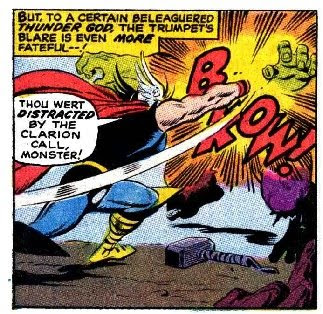 Namor and the U.N. reps have made nice, folks, so the fight is over. No clear-cut winner here (except the Subby/Goliath clash), so--waitaminnit! The Hulk says "This fight ain't over yet, boys!" and turns on his teammates!

Awwww, look! Sulky Hulky storms off, followed by the Surfer who also splits in a snit.

Oh, well, at least Namor and the Avengers show some class. Babyfaces always have'ta be good sports though, don't they? 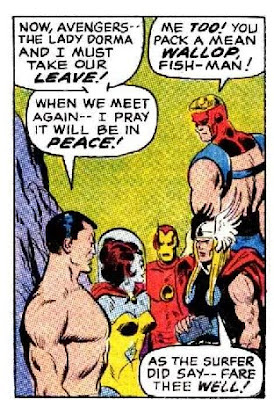 That's it for this Super Smack-Down, Groove-ophiles! See you next time!