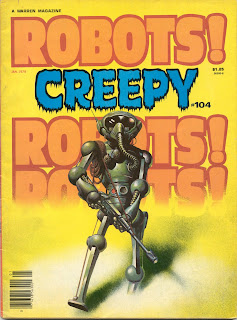 Steve Englehart is hands down one of Ol' Grooves favorite writers of the Groovy Age. I dug him on everything he did, the Beast, Captain America, the Avengers, the Defenders, Captain Marvel, Star-Lord, Batman, Justice League, Mr. Miracle...you name it, if Mr. E was writing it, I was buying it.

Terry Austin is revered as one of the all-time greatest inkers, due in no small part to his stellar work with John Byrne on the X-Men and Marshall Rogers on the Batman feature in Detective Comics. It was rare that we got to see his pencils and inks. Very rare, indeed.

Creepy was always on the "must buy" list of B&W comic mags. Jim Warren and company always produced top-notch comics that you couldn't pass up.

Put these three ingredients together under a stunning Ken Kelly cover, and you have today's stunning saga from Creepy #104 (cover dated January, 1979), "Holo Cost". Can you dig the awesomeness, Groove-ophiles?